I’ll admit to being just a little bit curious upon hearing that there was a self-proclaimed independent state residing inside Vilnius, even if it wasn’t entirely serious. This micro-nation, known as the Republic of Užupis, is basically an artist’s quarter on one side of the Vilnelė River – in fact the name itself, Užupis, means ‘on the other side of the river’. Apparently the primary requirement for entry to Užupis is a smile – it’s included on the entrance sign. 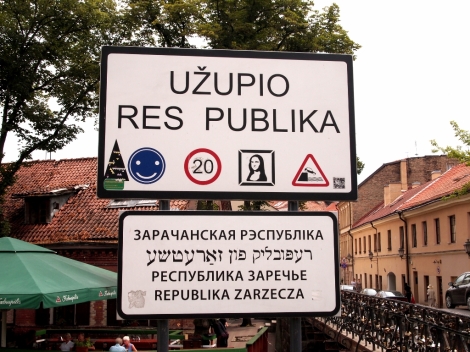 Welcome to the Republic of Užupis!

According to the free walking tour guide, the district of Užupis was once the Jewish quarter. Most of the Jewish population vanished during the Holocaust, and after the war the abandoned houses attracted a bunch of dodgy people – criminals, drug dealers, prostitutes and so on. As a result of this, no one wanted to live there and so it was pretty cheap. In the nineties, a bunch of creative types such as artists, writers, philosophers and other strange bohemian people began moving in and taking over the districts. On April Fool’s Day in 1997, they declared the district to be a Republic, complete with a president [a former Mayor of Vilnius], a flag [of a hand with a hole in it, for some reason] and an impressive army of twelve.

The Wonderful World of Už…

They apparently also declared themselves to be a new type of human…homo artisticus, as opposed to homo sovieticus or homo capitalisticus. I guess you can’t claim that they haven’t thought it through! Užupis Day is celebrated annually on April 1st, and the choice of date suggests that the declaration of the Republic – which has not been recognised by any government – may have been a bit tongue in cheek. Either way, it’s fun.

Getting into Užupis from the Old Town in Vilnius requires crossing one of many bridges [it is, after all, across the river]. As in other parts of the Baltics, the Russian tradition of newlywed couples attaching padlocks to bridges as a symbol of their undying love is popular here, and so the bridges are pretty chunky with locks of all colours.

Apparently if you take your passport, it’s possible to get it stamped with the official Republic of Užupis stamp at the Galera. Unfortunately, the first time I went there I didn’t have my passport and the second time they were closed.

Once in, it’s really a matter of just wandering around. There’s not a huge amount of ‘official sightseeing’ to do here, aside from the angel statue, the mermaid in the wall and, of course, the Constitution.

Alright, I’m putting it out there. The constitution of the Republic of Užupis is the single most awesome constitution I’ve seen, and not just because I happen to love cats. To be fair, I haven’t actually read through a lot of constitutions, so maybe there’s other countries that have thought equally long and hard about the rights they want constitutionally enshrined and come up with 41 equally brilliant points…but I highly doubt it.

I really don’t think that any government is too concerned about protecting the right of an individual to own and love a cat, or the right of a dog to simply be a dog…as opposed to what, I’m not sure. Anyway, I would invite those who doubt my judgement to peruse the complete constitution of the Republic of Užupis and come to their own conclusion, which I expect will concur with mine.

Pretty brilliant huh? It’s translated into eight different languages and displayed, quite inconsiderately for photography I might add, on mirrors on a wall in the centre of the Republic.

What really disappointed me though was the fact that in all of Vilnius I couldn’t find any souvenir-type thing that included the Constitution. Surely that would be a top-selling tea-towel or something like that. Keyring? Magnet? T-shirt? I could potentially make some money from this…
Wandering around Užupis was interesting, coming across little bars, Tibet Square – a square dedicated to recognising all the nations of world which are unwillingly occupied – and strange statues. I mean, Backpacker Jesus? WTF? No really… here’s the Lord Jesus Christ with a backpack, complete with a sleeping mat and everything. He’s definitely prepared for something.

There’s also, for some reason, a statue of a penis. I couldn’t find out any story behind this, but I’m pretty sure it symbolises the same thing that giant phalluses have symbolised throughout human history. At least it’s better designed than the numerous penises that have been drawn on walls and posters by some uber-creative teenagers who probably imagine that they’re the first to think of drawing a dick and balls on billboards.

Yes, it’s exactly what you think it is.

There’s a strange little alleyway in Užupis that is apparently dedicated to an old Lithuanian street artist, who paved the way decades ago for the development and appreciation of street art. 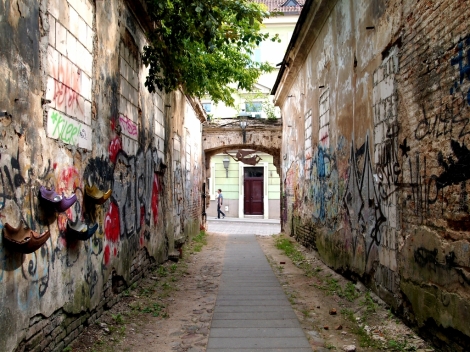 I know his first name was something like John…and that this little alley, covered in graffiti, was apparently preferred by him over a nice shiny statue or some similar sterile honour. The first day I went there, there was a cool broken old phone the size of a brick in a little alcove. It was gone the following day, but some flowers had been added to a tyre-vase attached to the wall a little further down. It was an interesting place. 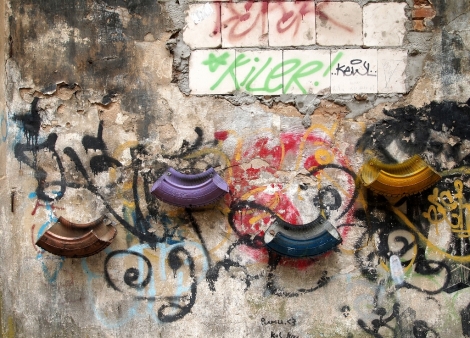 21 responses to “On the Republic of Užupis and the Most Awesome Constitution Ever.”

Photos and Videos by a Brit in Mexico City

A series of thoughts, speculations, and accounts as I study abroad in Turkey

An Oakland Girl in the World

Red Pants and a Mustache moves to Seoul

I'd rather regret something that I'd done than something I was too afraid to do.

Editor and writer. Interested in tiny things, nineties nostalgia, old jungle mixtapes, exploring, and my cats. Not to be fed after midnight.

I Travel I AM